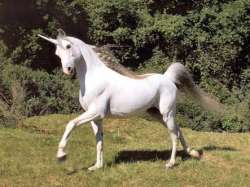 Here's a philisophical question. A mentally stable person comes up to you, who you know compulsively tells the truth, and has never lied at all. He says that he was walking through the field and he saw a unicorn, which he went up and petted. He says he was not on drugs and was completely sober at the time.

Do you believe him?

I would believe he thinks that is what he saw. But I would say he was wrong. He is not lying. He is mistaken. Also fat.

>>684245672
No faggot. Unicorns don't exist. I tell that faggot that he didn't see a unicorn and that he needs to get his motherfuckin eyes checked and then go get some motherfuckin glasses.

>>684245672
Sure. If he says he saw a unicorn, he probably saw what he thought to be a unicorn. I'd have to see it as well to make up my mind about whether or not I also think it's a unicorn.

this actually happened to me. good friend of mine, serious, no lying, told me he got raped by a ghost. was dead serious. i guess i believe him, but not sure what to think. he was very detailed about the experience and visibly shaken.

>2016 year of our lord not knowing about unicorn tech

>>684245672
A lot of the "philosophical" problems that come up with thought experiments like this are because it's never going to happen.

Otherwise I'd say it's a case of misidentification or a deformed horse or something.

unicorn??, shut the fuck up faggot!

I can answer your philological question: I think you are fuckign stupid for even asking this to people.

Don't ask this to people irl, they will think you are a fucking weird nerd feggit

>>684246888
I believe I saw something paranormal when I was 13-14. I swear a light flew in my room from my window while I was in bed and flew around the room. I used to listen to the radio while I slept and all I heard was static. I was WIDE awake and pumping with adrenaline at what was going on but nobody believed me. I don't believe in ghosts or anything but I still have no logical explanation for what I saw.