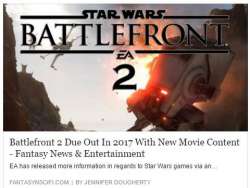 How can EA keep getting away with this?

was it really successful? its just going to be reworked assets with nothing really new.

they might add vehicles though. but , fuck, maybe not. lol

>>684238701
Because people buy it, that's how it works these days, you take a long established IP and you don't bother trying and you ask for as much money as you can. You can't blame the companies, their goal is to make money, not games, blame the retards who buy this filth.

>>684239219
>their goal is to make money, not games, blame the retards who buy this filth.
The sad fact about gaming. No one cares to make a "good" game anymore as they only care about profit.

>xbox original, ps2, nintendo 64
where all the true games lie

though, PC seems like they still have servers up.

>>684239467
Official servers are down, but there's a number of fine private servers up. Hell on steam a review gives you a how to guide.

one of the best multiplayer games ever

>>684239885
Fuck YESS I played it non stop for months, even got my bro into it and my dad used to watch us play (I didn't have my own PC at this point). I was so hyped for the new one, i rarely buy games on release let alone physical special editions. I was devastated when I played that dog shit.

So glad I didn't buy that garbage game.

Gonna take this time to bring up Rainbow 6:Siege.
>5 small maps
>8 characters
>non customizable
>no campaign
>15 weapons (from a tactical shooter, you'd expect more fucking weapons)
>95% of weapon customization consist of weapon skins
>can only play scenarios offline
>8 characters and only one of them is allowed in a match at a time so if you're really proficient with one you have less than a second to choose them or you're stuck with the recruit character
>5 maps, 3 game modes

Tired of these unfinished games that are more like some sad college students final that should have been released for free on Steam.

Shit i remember the old battlefront 2. If I still had an Xbox 360 I'd be playing that shit to this day. didn't have a case for it so it was scratched to shit but still ran.

I was close to getting Seige, but never got around to it.

So far every Battlefield game I've gotten has felt like it was worth getting. I'm assuming BF1 is going to be the same. I'm considering preordering it, despite being antipreorder.

>>no campaign
It's a multiplayer game and does have a sudp campaign.

>>15 weapons (from a tactical shooter, you'd expect more fucking weapons)
No it is character based

>>95% of weapon customization consist of weapon skins
You pix your scope and can add attachments what else is there?

>>can only play scenarios offline
Scenarios are for training and ate the same as terrorist hunt.
>>8 characters and only one of them is allowed in a match at a time so if you're really proficient with one you have less than a second to choose them or you're stuck with the recruit character
Who the fuck is only proficient with one character and who the fuck would choose recruit over all the others?

This is one of the most original games to come out in a long time, with purposefully individual characters forcing team play and intelligent selection.

>>684241392
With Rainbow 6 Vegas, why would they release this garbage ass unfinished product?

>>684241601
Vegas was a good game, but was cancer compared to the original rainbow 6 games. Siege is more true to those original titles, while embracing modern competitive 5v5 and character based selection. It is the most tactical FPS at the moment bar hardcore realistic shooters like Arma, squad and Insurgency (assuming you play with people who play those games tactically)

Nobody will buy Battlefront 2 unless they change things up dramatically.

I'll tell you a secret about EA Burnaby; Guy named Tripp. Fuck you. I'll say this just like the auto industry EA is starting to hurt over pensions.

Did you know for GM to pay someone $35 an hour; they in reality shell out over $160 an hour due to retired employees. They can't suck enough out of current employees to cover.


Anyway ya; EA is now a bloated ship that's doomed to fail at some point.

This is the way season passes SHOULD be.

>>684239219
This is true, but I think there's more to the story. In the past, we got fantastic Star Wars games for many years while most video games based on movies were shit-tier. Why didn't Star Wars games follow the same trend? It's because the game development studio LucasArts was owned by the same entity that owned the rights to Star Wars, George Lucas, and so the studio didn't have to pay anything for licencing the intellectual property rights. Most movie based games suck, just like the new Battlefront, because they spend a huge chuck of what would have been their production budget on the film rights, and then have to make due with whatever they have left. This makes most games based on movies gimmicky cash grabs since they have to make the most for their investment.

Now that Star Wars is owned by Disney, and the game developers and publishers are separate entities, they have to pay for the licencing rights just like other movie-based games. The results shouldn't be surprising.

Also, microtransactions in a FULL PRICE $60 GAME is fucking cancerous bullshit that needs to die.

>>684239885
Dude yes, the 3 story campaign was awesome, I enjoyed the full Alien cycle online face hugging a predator or a marine to evolve to the full grown Alien. One of the top best PC games ever.

>>684239365
This isn't necessarily true. Some huge publicly traded companies might be this way, as they are always trying to squeeze more profits out than last quarter otherwise the stock crashes. However, most studios don't fall into that category, and most game designers do it because they fucking love video games.

There are plenty of good games still being made these days. Actually, there are more now than ever thanks to Steam and the Xbox and Playstation marketplaces.

>>684244063
EA is both the game developer AND the publisher. Disney just owns the license. Stop trying to pretend like you know what you're talking about.
Look at Alien Isolation: three entities: one developer, one developer, one license holder - and the result was an amazing game.

>>684244775
There are always exceptions. Are you denying that most video-games based on movies suck just because one didn't?

My guess is that either the Alien franchise doesn't command that much money for licencing anymore, they have a better agreement based on royalties rather than cash up front, or the developers just poured their souls into it.

If you people want to waste real money on udmb cosmetic items it's up to them, it doesn't break the game and its not P2W.

I wasn't defending Ubisoft and anyone who even bought a recent AC or a season pass is a fucking retard, black flag was the only good recent AC and that is fucking old now.