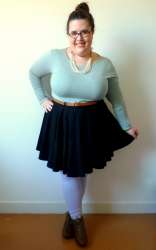 >me a few years ago
>some fat chick in our class
>she's a feminist genderfluid whatever
>lets call her shopping cart
>one day in class we're doing one of those jeopardy review games
>teacher decides to split the class boys and girls
>thisgonbegood.png
>"shopping cart why are you on the boys side. Quit fooling around."
>"excuse me Mr. teacher, I'm a boy"
>"shopping cart please not this again"
>this has happened a few times before
>everyone either groans or starts to smile because they know what's about to happen
>land whale starts screaming about how she's being oppressed
>that escalated quickly
>teacher tells fem to please go to the girls side because she's causing a disturbance
>"do you want me to make a complaint to the board leader? I can get you fired"
>teacher obviously doesn't want to put up with this, puts her on the boy side
>us guys are sort of side eyeing each other
>I tap her shoulder
>"what do you want anon" she says, gasping for air from walking two steps
>"I think this is an unfair advantage. Do you want to go to the girls side?"
>other guy chimes in "where you belong"
>she thinks she's cool telling us "fuck you" in sign language
>turns towards me
>"touch me again and I'll accuse you of rape"
>uh what
>anyway the game starts. It's her turn to go up but she isn't paying attention.
>tap her shoulder
>whathaveistarted.gif
>turns angrily
> "ANON RAPED ME!"
>everyone turns to her annoyed
>"what is going on back there?!" teacher yells. "What did you do anon"
>tells him I tapped her shoulder
>he tells her to calm down
>she listens after giving a speech about gender
>everyone ignores it and is quiet for a few days

Not enough room to continue. Full story continued in a bit


>few days later, everyone has heard of the rape accusations
>apparently she's claimed she's been raped by several "grown men"
>no one believes her.
>some guy is "triggering" her by tapping her on the shoulders a few times, cuts her off in the hallway
>"THAT IS IT" the blubber beast yells, everyone in hallway stops and stares
>screams how she's sick of being mistreated
>"that's it. Everyone at this school is so mean and conservative. I just want to kill myself!"
>a few laughs
>screams ITS SERIOUS!!, red faced
>guy in back, "make sure you don't hang yourself, you'll bring the ceiling down"
>she begins to cry and drops all of her things
>her lesbian friend goes to help the beached mammal
>the genderfluid runs out of school
>wheredshego.png
>a few students questioned because teachers could hear
>the kid who made the remark was suspended for a day
>we never saw her again

I think it's safe to assume. What'd you guys think?

The evolution of humankind wouldn't suffer one bit if people this fucking stupid weren't allowed to continue to pollute the gene pool.

>>684191725
honestly would care if she wasn't a femanazi, but we should employ acts of social darwinism for these kinds of people

Like I'm not saying that she should be killed immediatly, I'm saying that it's best for mankind... if it were to happen before she can breed.

Imagine the human race in a couple hundred years if we could purge the lowest 10% every generation. It used to happen fairly naturally now everyone gets to live and breed.

can people still call the hospital and ask about recent checkins to the ER?

holy shit this shit bugs me.
Beyond agreeing with people who feel like they're misgendered or whatever the fuck - imo who cares. We're all awkward in our bodies, we all have issues of some sort, but it's fucking retarded to expect everyone to submit to your every demand just because of some bullshit nonsense, legitimate or not.
The major issue isn't people being "transphobic" or acting like "oppressors", it's the demand for safe spaces like the entire world is their personal tumblr page. There are always going to be assholes of every variety, especially in high school, and if you're going out of your way to attract negative attention you don't get to be absolutely buttblasted that you receive it.
I fail to understand how it's so mind boggingly difficult to suck shit up and be weird on your own fucking time.
Also fuck fat chicks.

This nonsense is so volatile because social change has to be in defiance of socitial conventions, not hard science.

Kind of a brick wall.

Humans need to apply this shit or we'll never get anywhere

>>684193083
We should have social tigers. Like tigers, but human. With hands and stuff but really tigers, with a predator aspect. They'd be hot.

dude get the fuck out of here

>>684191725
Feminists, SJW, bitchy women in general all need to be rounded up, soaked in gasoline, and burned alive.

>>684196763
Yes, what you say is true, but you simply don't realize that the only reason why we don't live in caves is because we take care of the weak. If we disposed the weak, then the society would fail.

What if an important scientist loses a leg. Do you just dispose of him? No! You help him.

However, I expect you to say something retarded like
>retards are not scientists
nobody gives a shit. The average tax-payer is a good man and wants to help people because they're mentally healthy, and not like you.

>>684197360
Not who you're replying to
you're right in one regard: human society's retards are not the retards or the weak of what they were before civilisation

>>684197360
The Scientist losing his leg does not significantly impact his ability to contribute to society in his respective capacity.

>>684198488
A human is afterall still a human. It's easy typing "retards should all die" on your keyboard, just like typing "lol war is easy, I could kill anyone with muh AK-47". It's childish thinking with limited logic.

I don't mean to be edgy but we should let these people die out.

>>684198697
If you don't wish to contribute to society, then you should not benefit from its function. If you are incapable of contributing to society, that's a subjective and infinitely nuanced, situational topic.

>if a scientist looses a leg

No, we'd kill them if a scientist tried to prove Air conditioning is sexist.

It was actually legit harassment though, not this "oppression" shit

People born with physical and mental issues should be aborted if we test it in the womb. That or we manipulate genes and try to create a future where nobody has mental illnesses. Even still, there are people with downs who are probably smarter than, you, so it's good.

You don't think those who're sitting in a chair attached to a machine should be killed? They're less than human at that point.

I'm not fam, I'm trying to understand where you draw the line between living and dead.

>>684192104
Awesome. So fucking incredibly satisfying. What the fuck does that bitch expect being the center of attention with her hyper sensitivity ignorant ass bullshit. I hope she rots in fucking hell that piece of shit garbage motherfucking triggered bitter insecure overweight slug fuck human hating exceptional special cunt of a human being. I pray to whatever allah fucking god isis finds these type of people and starts making more justified videos. I hope I've offended more of you soft snowflake cowardly disgraces of human beings

>>684201370
Living as in still feeling. Dude, how edgy are you? You obviously just want to have an excuse to kill yourself. I'm done here.

Nigger do you know how much it costs to keep someone "Alive"? Even if you're a walking talking person, you can still be dead on the inside. Look at op's post. The girl is clearly deserving of death/rehabilitation. She's a cancer of society.