>There was never a holocaust, but there should have been and, 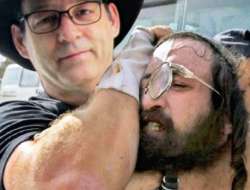 >There was never a holocaust, but there should have been and, rest assured, there WILL be, as you serpentine kikes richly deserve one. I will not rest until every single filthy, parasitic kike is rounded up and slaughtered like the vermin that they are. the white man has had more than enough of international jewry and we are fully prepared to smite the parasite for the millionth time. the greedy, hook nosed kikes know that their days are numbered and, unlike in the past, they now have no where to run. This time, there will be no kikes left alive to spread around the planet like cockroaches.We will get them all into the oven and their putrid memory will be erased from the planet once and for all.like all the parasites, the Jew will continue reproduce until every single last one of them has been wiped out. this is why it is crucial that all kikes are ruthlessly and mercilessly butchered for the good of us all
KILL ALL THE JEWS NOW! EVERY LAST ONE!

Can we get rid of the Muslims too?

>>684183814
yes the filthy mudslimes deserve decapitation as well, killing dune coons is my one true passion in life. all hail the KKK and kill the jewish cockroach

>>684183619
they call me the ten ton tel aviv terror, the one man klan, the walking holocaust, the nigger grave digger, the chimp choking champion, the shaboon destroyer, the kike killing kommando, and the beast that will destroy the middle east

>It now appears that Ben Garrison’s capture, which we reported on last week, may have been a ploy by the notorious cartoonist and militia leader to obtain nuclear launch codes which will allow him to detonate an atomic bomb inside of the Jew State of Israel and murder millions of Jews.
>Garrison was taken into custody by the elite SEAL Team Six unit, but escaped mere hours later, having broken out of his shackles and murdered all those aboard the helicopter that was meant to be carrying him to an unnamed CIA aircraft carrier in the Pacific for interrogation. The chopper-bird was later found in the mountains of Montana, Garrison having disappeared back into a complex system of secret underground tunnels.
>“In the event that Garrison was able to completely exterminate all Jews in one go, I have no doubt he would give his own life. But even if he managed to kill all of the Jews in Israel, there would still be millions of the diaspora left around the world – and as he has repeatedly voiced, he believes he cannot go and ‘fill his glorious post among his blood-drenched Viking ancestors in Valhalla’ until ‘every last stinking kike has been wiped-off the face of the earth.'”
>The unnamed agent also said that there was a concern Garrison could launch a nuke from inside Israel into the Islamic holy city of Mecca, thus stirring up even worse Arabian hatred against the Jews, using them as a proxy army for his genocidal agenda.