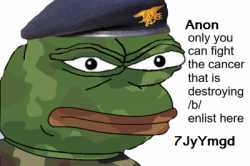 In the end, I'd like to remind you anon that the fight begins with you. Stand up to this, join the fight.

>>767572492
>Reminder that 99.9% of posters who claim that current /b/ is shit compared to old /b/ are newfags from the post 2016 era who were not even around to witness "old /b/" and only go off of screenshots from that time period. Not realizing that /b/ has always been shitty, and that if you don't like it, fuck off back to your shitty diet coke version of 4chan.

>>767573343
What would fill the board if all the pornfags left though? YLYL threads? That's just as autistic.

>>767573444
As the name of the board suggests, random threads, spanning different subjects.
To be frank, the quality of YLYL isn't that good, they could use some improvement

I have pretty much stopped browsing /b/.
Now even /k/ is better and funnier place.

>>767572492
Filters are the only solution albeit an unrealistic solution. Ideally everyone would use filters which would hide the shit threads, nobody posts, the posters get bored and stop posting. But not everyone will use filters so, doesn't matter. Derailing won't work either for the same reason, not enough people will do it

tldr: /b is a shit train that you can't stop

>>767572492
>We are tired of waiting for the mods to actually moderate /b/
They are too busy banning OC providers for things like Rick and Morty voice impersonations.

I wish there was a board for traps/cd/etc.
It'd be a great place to find good pron while also keeping /b/ to random shit.

I shall do my best to derail their threads. The resistance won't be easy, far from it, but when you are fighting for your home, it is something we must do.They have taken our board and our enjoyment and replaced it with 6 IG/FB Fap threads at any one time, and for that, they will pay.

>>767572492
>I know it's supposed to be anything goes, but I'm special so when I say threads are bad they should be deleted. WAAAHHH

give us memes pls

I created an account ut can t find the discord

>>767576423
>resistance
When you are the minority you are a resistance
>discord
Thought of using IRC or Mumble but it wouldn't provide image support and paying for a Mumble Server isn't cost efficient.
>frogposter
Next time I'll post some sissy shit maybe you'll like it

We need Spider-Man.. we need a serious, sustained, powerful, relentless Spiderman assault on each and every thread.

Spider-Man needs to hit hard, hit fast and hit continually - it'll take a few months, but with a sustained assault Spider-Man can do it.

I fucking hate Spider-Man, he was used to tear down a few good threads by retards, but he's the weaponised autism we need now.

/b/ was always shit HOWEVER the actual spam / shit vs quality ratio has been endlessly shifting.

In 2007 there were quite a lot of fun raids and discussions to be found pretty much anytime you got on.

In 2011 there was the occasional genuinely fun and creative thread, one or two per day.

Fast forward to today and any fun and creativity is dead and buried for years.

Pick a repeating/re-posted thread. Bomb the fuck out of it...be diligent in your efforts. After a week or two, they will begin to moderate themselves. The key is to be constant, unwavering...diligent.
/b/elieve. P.S. OP, if your meme didn't earn the Budweiser on it's skullcap, please remove it, show some respect. Thanks.

We've tried raiding those but the mods here protect those threads.

>>767581034
>im from reddit and i should be able to post all the autistic goodie two shoes bullshit i want!
>”MUH SKEEKRET KLUB DURRRRR!”

>>767584983
i spammed those threads for a good while. furfags are just legitimately aspergers so they dont know when to quit. it needs mod input

>>767585129
Im not saying they are offlimits, just saying we'll get banned more easily. We're hatching plans to make that not the case anymore.

My fucking sides. This shitheap hasn't done anything worthwhile in years.

It's the same w the faggots who post bananas in every ylyl thread. Some serious autism right there

i have no fucking clue if the elon musk shit is some dank new meme or just an extremly cryptic spambot, thats how shit /b/ is now

>>767586612
sweet pic
what's all the sprinkle splatter sparkler action below the initial det?

>>767572492
>mods wont ban something I don't like
You fuckers are worse than the fucking bronies that were here.

>>767588263
Then you should understand that while there is more shitposting, the few "raids" I've seen lately are not for the lulz, but for getting people to cause self-harm/ harm to others, or for doxing perceived political enemies. So I would rather have a smut filled board than a board that is consistently trying to get the freewebz rekt.

When you set a password for your Twitter account, we use technology that masks it so no one at the company can see it. We recently identified a bug that stored passwords unmasked in an internal log. We have fixed the bug, and our investigation shows no indication of breach or misuse by anyone.

>>767588589
>the few "raids" I've seen lately are not for the lulz, but for getting people to cause self-harm/ harm to others
The sadists are now the majority of this board, I can't say that's too much of a bad thing but maybe there should be more lulz based raids.

>>767589223
You've got some serious rose tinted glasses if you think /b/ was ever serious about quality of posts.

>>767589848
>You've got some serious rose tinted glasses if you think /b/ was ever serious about quality of posts.
When did I write anything like
>I want old 4chin
>old 4chen is best 4chen
A summary of what I wrote is if we push out all the trash then we'll inevitable be left with higher quality threads.

>>767590432
Let's just say a certain board still hasn't figured out weaponized autism, as they are too busy crying about white genocide. They started about 2 years ago trying to get /b/ to do their dirty work.

>>767590954
>think of ways to do so
moar shitposting is the cure. We need some canadians and australians.

I don't think you fuckers understand the point of /b.

If you want a moderated experience, go to jewbook, 9fag, plebbit, stormfront, or, hell, any board on 4chan that isn't /b.

>>767572492
Did you come to /b/ for the first time yesterday or something? It has always been like this. If you don't like it fuck off back to your MLP forum.

>>767575606
>need their own board
>1-2 threads up at a time
>little to no variation between them
>would also encourage cp posting
Sounds like they need to stay here.

It's time for another crusade